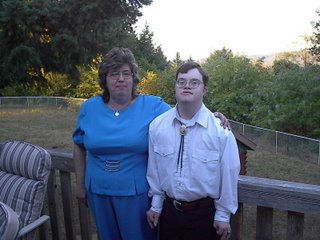 Thanks for all your well wishes and inquiries about Billy Ray's recovery.

He is doing better than we dreamed he would do based on all the side effects and complications in the last year. He, of course, is not happy with the restricted diet which means soft foods. He wants hamburgers, popcorn, etc.

He is definitely getting tired of milkshakes. He will eat some baby food but throws his nose up at lasanga and other things in baby food that he loves adult food. I am getting as creative as I can with the food processor. I pureed lasanga for his lunch and he ate that well. Tonight I baked a terriyaki chicken patty then cut it up and put in the food processor with a little extra sauce so it would be smoother and softer. Both worked really well.

He will see Dr. Masterangelo for a followup on Monday and hopefully he will add some things. I know that bread is going to be the last to add and BR will hate that.

He is keeping himself busy mornings until he runs out of energy and then rests. I worried that he might be doing too much so soon after surgery but Dr. Masterangelo said it was good for him to be moving around as much as he can. I have been worried that he would hurt himself throwing himself on the floor like he does sometimes playing but he hasn't been doing that as much. He is playing with Penny Lane a lot this week.

The above picture was in our old house in Scotts Mills. I am running out of pictures that you haven't seen. Time to take some more!!

So glad that Billy Ray is doing better. I wish for him to fully recover very quickly and to be back on his favorite foods soon. That is a great picture of the two of you.

Yay Billy Ray:) So happy to hear he is doing well:)
Tina