As stated before, I love the humor of Lori Miller Fox. She has done it again with Toasts with a Twist. Lori also links to 10 Christmas Carols for Parents of Special Needs Children on the specialsneeds.about.com site. Both are great comic relief at a time we probably need it most.

Our day started out excited and trying to get things ready for Billy Ray's birthday party. By mid morning it was getting more difficult. I don't know if it was the excitement on his part or pain from two folicitis leisons he has in somewhat delicate areas of his body. Nevertheless, we got into a full scale behavior - the kind that exhausts me for days. Thus, the choice was to cancel the party or risk that we could work through the behavior before time for his guests to arrive. I chose the latter because he has not had a birthday party in two years (the first when we moved the day after his birthday and last year when he was too ill). He clearly wanted to do the party. We went forward clearly not able to do everything we had hoped to do especially in terms of housecleaning, etc.

Here are some pictures to share his party with you. Below is Billy Ray manning the door. He loves greeting people. 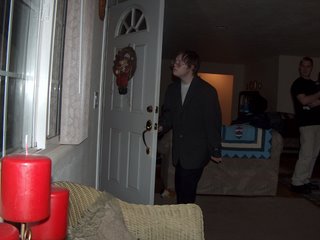 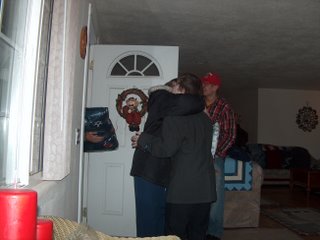 Hugs abounded. Here he is hugging Denise Lighthill one of his special people.

Below he is making the ice cream punch. 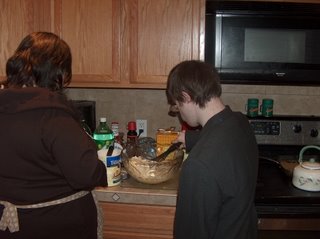 He was more social in terms of interacting with his guests than he has been of late. We were also able to get him to look at the camera and smile. Here (below) Pastor Lighthill was taking the picture and got him smiling for the camera. 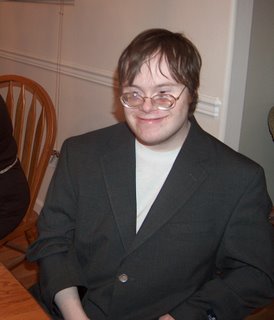 In September when we had guests for dinner, a friend brought a birthday cake for his wife (Donna referred to in many posts herein as the cookie lady because she bakes the high fiber cookies for Billy Ray). To our amazement he not only really got into blowing out the candles on Donna's cake but loved the cake. It is a chocolate raspberry that a lady in our area made. I was able to order an identical one for Billy Ray's birthday this year. Here he is blowing out the candles with Sarah looking on. 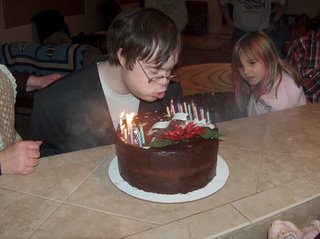 Below left, he is really getting into opening his presents: 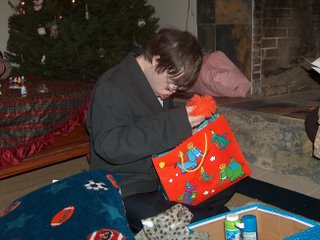 So often we just don't know how Billy Ray will react. It is difficult to decide whether to do events like this especially when the day starts out the way it did yesterday. The alternative is isolation and loneliness. It is worth the struggle to accomplish. I can't ever remember a birthday party where he mingled as well and seemed to enjoy his party as much as he did last night. 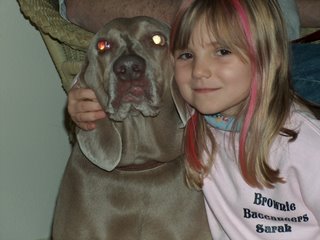 It appeared that everyone had a good time especially Billy Ray. The picture on the right doesn't have anything to do with Billy Ray but I can't resist sharing it. This is Billy Ray's service dog Penny Lane and Sarah Henry. Even the dog seemed to enjoy the evening.

Our friend, Dave Peters, brought Billy Ray an assortment of fun things to do including silly straw. He really enjoyed spraying it towards his guests. I regret the pictures of that didn't turn out because he was having so much fun with it.

Denise and Pastor Lighthill brought Billy Ray a large soft textured pillow with sports figures on it. Jeannie also brought him a very plush and soft Koala bear. Billy Ray went to sleep cuddled with both which seemed to be an indication of how the evening went for him. Very rare for him to go to sleep so easy and peacefully.

I am hearing from lots of folks who are feeling isolated right now. I so know what that feels like. I am working on an article about coming out of isolation and the need to create a community that works for your child and the whole family based on the procedures in Entertaining with Billy Ray and The Holidays with a Complex Child.

Today is Billy Ray’s birthday so we are trying to get things ready. There is still a part of me that hates the lack of perfection because I am a “perfectionist messie” but it is better to adapt to what works for us than to stay in the isolation of never entertaining. The need for coming out of isolation has superseded the need for perfection in our home.

I will try to get some pictures from Billy Ray’s party and post them tomorrow.

Merry Christmas to all.

I wanted to let you know that some of the articles I wrote for publicity for my book are being put on Parenting Your Complex Child website. They are not all there yet so check back often. I have several to add.

I also wanted you to know that I am starting a new blog relative to parenting adults with special needs to separate things out a bit. I hope to write on both a couple of times a week at least.

My email inbox has brought multiple reminders this past week that our commitment as parents to children who experience special needs does not stop with transition into adulthood. Whether an adult child is in some sort of out of home placement, his or her own living situation or still in the family home, we continue to have a higher degree of involvement in their lives than other parents might.

This time of year, I think a lot about Billy Ray’s future. It is time to update files, etc. that I do near his birthday. He will be 24 next week. My mind wonders how we got here so fast. My baby is now an adult.

On Sunday Pastor Lighthill included, in his sermon, an inspirational story of a father doing the Iron Man Triathlon with his disabled son. Dick Hoyt has some kind of raft that he puts his son on for the swimming part of the triathlon and swims pulling son Rick on the raft, Rick is then put on the bike which his Dad pedals for the second part of the race and is pushed in an adult stroller for the final phase of the race.

According to this story Dick Hoyt, at 66 years old, has decided he needs to change to a less demanding race.

Mr. Hoyt is a great example of many parents who help their children to live out their dreams instead of focusing on their own dreams. As parents our focus and commitment changes from what it might have been. We travel a road different than we might have traveled. Who can say, it might end up being more fulfilling than we imagined.

We all deal with periods of what I call the “funk” at some point and in our own way. Some might call it depression. Some call it grief or disappointment. The funk, as I experience it, is often exhaustion for long periods of sleep deprivation. Everything seems more difficult than it normally does.

It is probably not entirely connected to parenting a special needs child. It could be worse if our kids experience special needs in the same way that everyday things of life seem to feel more overwhelming. It does seem harder to pull yourself out of it because it is more difficult to do some of the things that would help (like time for yourself and extra sleep, etc.)

There are seasons of our lives when change seems to be unavoidable. Fortunately when Billy Ray goes through a period of change it is not usually the same time I do. This time we are both going a time of change. I have been dealing with seemingly overwhelming paperwork that has been let go during Billy Ray’s multiple health crises, still unpacking boxes from moving almost two years ago and facing some physical things of my own, mostly normal aging stuff.

Even things unrelated to our kids can seem more overwhelming than they might be. For example, my elderly parents have reached the point they can no longer take care of themselves. It has been difficult to accept the fact that we couldn’t bring them to live with our family. This is not entirely because of Billy Ray. Fortunately my brother has been able to move them to his home. He is bearing the brunt of the situation but it is still emotionally charged.

At the same time Billy Ray was hospitalized with pancreatitis, my father-in-law passed away (these events were less than two weeks before the publicity was to begin on Parenting Your Complex Child. My mother-in-law is incredible despite low vision. Larry goes to visit and raves about how well she is doing.

Billy Ray’s physical health is better than it has been in a while except for recurrent sinus, ear and skin infections. His surgery in September has made a major impact on his health. It does; however, complicate things because it has so strongly affected his appetite. He wants to eat but can’t eat as much as he used to so we do a lot of small meals. . It seems we are cooking a lot more and sometimes for the garbage disposal. On the other hand, he has more energy and wants to do things again. It is a good thing to regroup for him and generally uplifting. However, if you are going through other things in life it can be more overwhelming.

At some point we have to pull ourselves out of the funk. I know that I am ready to do something about it when I want to do certain things like curl my hair or clean house. While those things may not make the major changes in life that is needed, they energize me to do other things.

When exhausted or stressed it is hard to make yourself do even important things. Sandra Felton founder of Messies Anonymous and author of many books, suggests baby steps and using a timer. I use a timer for projects for me and for Billy Ray. It helps a lot because you can make yourself do something for 15 minutes at a time much easier than trying to deal with a total project at once.

The other things that help a lot are the Serenity Prayer and the lighthouse concept which I have written about here and here.

The funk seems to be on growth and regrouping in ways nothing else can. I hate the funk when it starts but it brings on valuable regrouping and growth.