The Sandwich Generation with a Special Needs Child 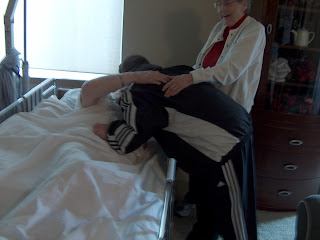 I have heard a lot in the past few years about “the sandwich generation” where parents are caring for their children and their own parents. Only recently, have I begun hearing about sandwich generation parents where one or more of the children experiences special needs. Maybe I am just paying closer attention to it because that is where we are right now.

When my brother and I talked about my parents needing to be with one of us it was a major consideration for me. There were many things for me to look at in deciding whether we could handle incorporating my parents into our home.

The folks need a single story house which we have but the only bedroom for them was next door to Billy Ray’s room and his noise would keep them awake and stirred up. Additionally, Billy Ray has been in and out of the hospital 5 (or is it 6 – I have lost count) during the past two years. I am not able to leave the hospital when he is there. We have actually rented a motel room a mile from the hospital a couple of times and I have not even been able to get there except maybe long enough to shower. During those times, it would be impossible to care for my folks.

I also had to look at how well my mother and I would get along. I am not going to go into it fully herein but suffice it to say my relationship with Mom has been a challenge my whole life. We are very different people. I am more like my maternal grandma (a people person and a messie) and my mom is a cleanie. Mom is not the animal person that I am. I feared she wouldn’t accept Billy Ray’s service dog (although she has accepted my brother’s dog well).

My brother and I decided that he would bring my parents to his house. One of those chair elevators was put in his stairwell but Dad’s health deteriorated quickly and now he is in a hospital bed in my brother and sister-in-law’s living room until arrangements can be made for a nursing home for him.

We visited my brother’s home in a neighboring state last month. I see how it has taken over the lives of my brother and sister-in-law. I see how exhausted my brother seems. I feel badly that I can’t help more than we are able to do. 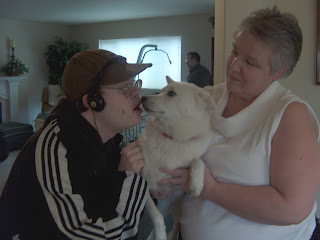 As you can see by Billy Ray gently leaning over to hug Papa with Grandma’s assistance in the picture above, he handled the visit as well or better than we could expect. However, when we tried to stay with the folks for a few hours so my brother and his wife could get it, the conflict between the care of my son and my parents became clear. Mom and I did work together on feeding Dad and Billy Ray but it was a struggle that probably would have worsened with time. It was difficult to watch Billy Ray and attend to Dad. I feared he would somehow ruin my sister-in-law’s beautiful décor or be too rough with their little dog (as you can see in this picture with my sister-in-law and "Coda" he loved him but Coda is not as sturdy as the service dog at home).

Billy Ray requires one on one care at home. We have to constant monitor. It didn’t take long to see that it wouldn’t have worked here on a day to day basis.
I finally came to realize that being stuck in the guilt I was experiencing was impacting our lives including Billy Ray’s. Sometimes you just have to get back into the idea of the Serenity Prayer again. Change the things you can and accept what you can’t change. There are just some things we can’t do but it is hard to accept that in times like these.