Billy Ray and His Clothes Hangers 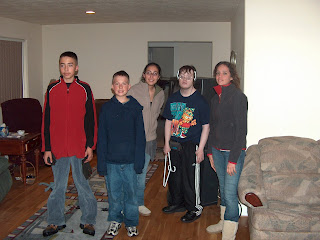 Billy Ray loves hangers. They seem to have taken on a whole new facet for him in the last few years.

When he was little his Dad used to buy him toy guns. It was not my preference but I felt Raymond should be able to make decisions regarding our son too and it wasn't a big deal at the time.

After Raymond's death and meeting Larry, Billy Ray began watching Larry's John Wayne movie collection. I became increasingly concerned about how realistically he played with guns. He didn't have toys that could be mistaken for real guns but living in a hunting and farming area, I was afraid he would come upon a real gun sometime and not understand it was not a toy. Larry and I talked to him about it and eventually traded him something (I can't remember what now) for his toy gun collection.

Billy Ray was amazingly accepting of giving up his guns but soon thereafter he started playing the "action scenes" from John Wayne movies using plastic clothes hangers as substitute guns. He began taking over the heavier hangers I kept for Larry's jeans if they were left in the laundry room. Soon we had to color code them in order to have any for Larry and my clothes. Billy Ray's were the white ones and we bought him the heavier ones.

Hangers not only serve as toy guns, they are a blaton that he conducts music with when he watches Mr. Holland's Opus and many other activities. They are with him much of the day. Fortunately he accepts that he can't take them out of the house but he wants to lay the one he is carrying by the front door as he leaves the house. As you can see they have a way of sneakng into family pictures such as the above taken last Thanksgiving with four of his "neecees and nefews" (nieces and nephews).


If all of our blogger friends ever got together, I'll bet we could laugh at the various treasures our kids enjoy.

Sorry I have been so delinquent in posting. A lot going on. It seems we have been sick all winter and dealing with my parents' situation. There may be some more medical news for Billy Ray but I will wait to confirm that until we know for sure.

There is some other news about Parenting Your Complex Child. My publisher, AMACOM Books, entered it in the 2007 Nautilus Book Awards Contest and we have made it to finalist. The winners will be announced at the Book Expo America in early June. I am very honored to even be a finalist.