Billy Ray and His "Girls"

I hear from other parents about their sons noticing girls but it hasn't been much of a factor with Billy Ray until recently. He did have a little girlfriend (we'll call her Debbie) in kindergarten until 7 th grade when we moved away but I think that was more her thing and her parents' thing than Billy Ray's.

The school program that they were in was a three year program. Debbie was a year older so she would move on a year before the end of each section. He didn't really talk about her during the years they were apart unless someone asked him if he had a girlfriend. He called her his "girl" but didn't seem to have any concept of what that meant . By the time he got to sixth grade, she was ready to get married and talked about it a lot. He didn't seem to understand and I let it slide.

After his Dad died I did take Billy Ray and Debbie for outings such as movies or the beach on the weekends.

I realized that she might be getting some encouragement when her parents dropped her off for his birthday party and wanted to tour the house. Debbie's mother asked if they would get to keep the house when they were married. My jaw dropped. Billy Ray was not even 12 yet.

He has always liked ladies but generally paid more attention to plus sized ones like his mom. He gets very attached like a child would to a favorite aunt or grandmother. However, I have noticed lately that he is noticing young girls closer to his age (24 years). He is smiling and looking.

He used to get a kick out of hugging Michelle, wife of his primary care provider, Brice Stanley. Then he would giggle when Brice would tease him about hugging his wife.

Yesterday, we were walking out of Brice's office and I heard Brice say "do you want to say goodbye to her?" I wasn't paying attention, I had his elbow and we were walking out. I looked around and he was grinning at a pretty young assistant behind the nurse's station. I told Brice I had noticed him noticing pretty girls lately. Brice reminded me that he is a 24 year old man. Dah! I get so busy taking care of all his needs I sometimes forget he is a young man after all. 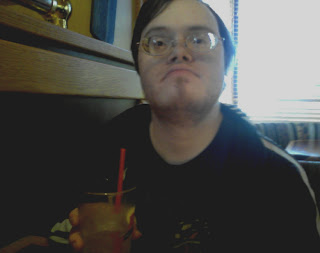 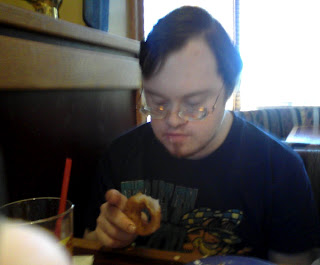