Reflections On How Far We've Come

It is late and an I am in one of those reflective moods again. It has been weird week, not entirely because of Billy Ray's issues. Our family is going through the kind of thing all families experience at one time or another in their lives whether or not they have a special needs child. It just seems to have come all in one week this time. 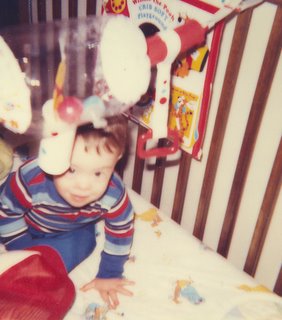 I wanted to lighten up a bit for the blog today and pertend I was Lori Miller Fox. In looking through the massive picture and visual files for Billy Ray for a picture I had in mind, instead I found myself reflecting on the stages of our life together as mother and son.

Too often we get so stressed by the present we forgot the fun moments. Here are a couple of those memories from our life together.

This little picture of Billy Ray in his crib always brings me so much joy. There is another picture taken the first day of his adoptive placement before his haircut that shows the transformation he made in the first day he was home. It is too old and worn to scan for you.

At fifteen months he didn't walk and was evaluated at about 4 months developmentally. Two months later he was running as if trying to catch up on life. 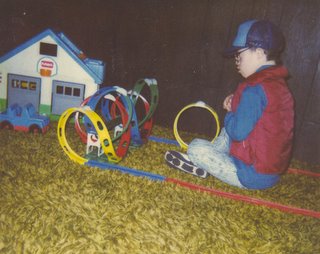 One year my attorney and Billy Ray's best buddy, Doug Harrison bought Billy Ray this race track. He loved to play with that toy more than any toy he has ever had. It is fun for me to see him being all boy before the Autism became more severe following a series of seizures at 14 years old.

We also did Challenger Little League. If you have a change to get your child involved in that program or just to go see a game it's something you won't want to miss. Challenger teams are little leaguers with various disabilities including children in wheelchairs and developmentally disabled children. Buddies from the other teams are assigned to assistant each Challenger team member. It is always a tie game and just for fun. Many team members will run to third base instead of 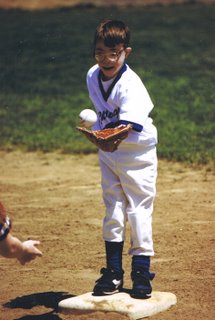 first and receive just as much applause. It gives the kids a great sense of accomplishment as well as a lot of fun. Here is Billy Ray the "catcher" .

It is hard to imagine the mature young man delivering Meals on Wheels with his support staff, Ron below is the same little guy in the crib above. 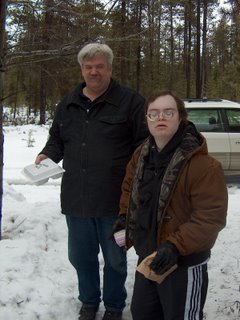 You really have a come a long way Baby and I am so glad you let me come along with you.

Thanks, as always, for sharing the pictures. I adore the one of him in the crib!