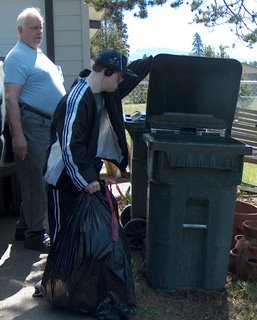 Billy Ray and his stepfather generally celebrate Father's Day on Saturday because if we go out in the big crowds it can be a little overwhelming for Billy Ray. Yesterday we went to the Mexican restaurant in our little town for lunch. After we ate Billy Ray proudly took cash to pay the bill and wanted everyone to know he had taken his "Dadgert" out for lunch.

Then we went to Dairy Queen to get an ice cream cake that both love but we haven't been able to allow Billy Ray to have it for at least year because of the various diets he has had to be on for medical issues. The clerk asked Billy Ray if he was going to go eat cake and he told her "for Dadgert".

I regretted not taking the camera so I could share it with you. Here is a picture of Larry and Billy Ray that I took earlier in the day yesterday to make a new symbol for emptying the garbage.