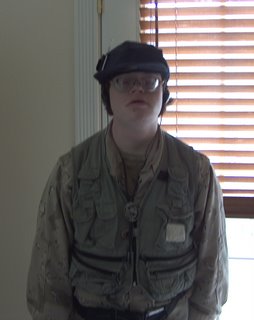 We just got back from seeing Dr. Masterangelo. Billy Ray is getting better. No issues to report. He hasn't been sleeping as well and my mind is wearing down so I don't have a much to share on this blog today. However, I can resist sharing the pictures I took this morning.

He came into my office this morning after his bath. He had his uniform (like "Bubba Mike") and both the radio hat and walkman on. He doesn't have the radio on in the hat but he loves the antenna on.

My mother-in-law is so creative as knowing what Billy Ray likes and finding things in catologs, etc. Several years ago she found these radio hats and Billy Ray loves them. He doesn't always wear them with the walkman but when he does it is cute. 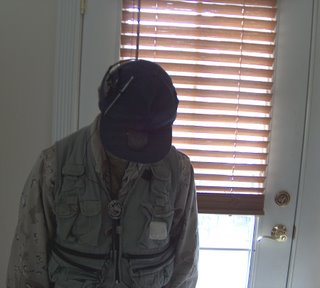 As I snapped the picture on the left he put his head down. I am putting it up anyway because you can see the hat better.

He is still having some pain. Dr. Masterangelo said the pancreatitis maybe chronic - he may have days with no pain other days where he needs to take pain medication and some days he will be hospitalized with it. However, the charming little boy that left us at 14 years old when he had a series of seizures, is re-emerging pretty often in the past couple of weeks.

I suppose that what is cute to me may not be cute to all but I must share. After we got back from speaking at The Arc of Oregon conference at the end of April we were sitting at the dinner table with him. He was especially noisy and I asked him to be quieter because I had a headache. He looked over at me and grinned. He said "I pay you back". I asked him if he was paying me back for being away and he grinned. That little imp!!

Yesterday he and I were making a casserole and then he and his stepfather took the kitchen garbage out. While they were gone a heavy thunder hit. When they returned I asked Larry how Billy Ray had handled it. Billy Ray piped up with "farted" and laughed. He wasn't upset about the thunder at all.

Love his sense of humor, "farted". You are a great mom and an inspiration.

I too love his sense of humor! Cool hat too! It's great to hear that Billy Ray is feeling better!