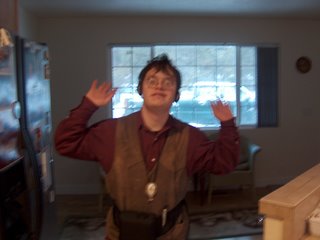 Billy Ray is marching with his walkman this morning. Our house has a great room which is basically living room and kitchen combined. In the corner where the kitchen is, there is a breakfast bar with the sink and dishwasher on the backside of it. The loop between the breakfast bar and stove and through the kitchen around to the other side of the breakfast bar makes a nice circle for him. He loves to march around and around each morning. It is good to see him have enough of his energy back to march.

We used to hate his need to be so active and noisy in the morning. Finally discovered that if we put his walkman on and just let him march to it until he gets his energy out it makes the rest of the day better.

I am reviewing his schedule and trying to modify it, working on what additional training we will need to give support staff as we change schedules. He is keeping us hopping with his improving health and need to be busier.

Ron, his support staff, said that Billy Ray really enjoyed his Meals on Wheels route yesterday. I don’t accompany them on the route so have never seen the interaction with folks but I got the chance the other day when we were at the clinic and a couple from the route were there at the same time. It was nice to see the relationship that Billy Ray and Ron have established with folks he meets.

His sinus infection is still there. He is sneezing some but each day he seems to improve a bit. His energy returning a good sign.