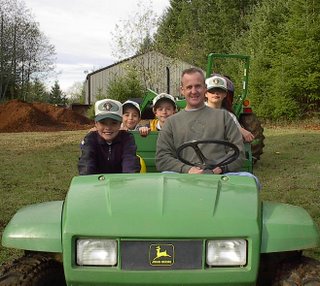 The email from some of you worrying if I don't post everyday is humbling. Yesterday, Blogger was having some issues and everytime I tried to do a post it said they were having having technical difficulties.

Billy Ray is doing fairly well. He is getting over the sinus infection gradually. Still having some pain in his stomach but it is more manageable. He is continuing to be interested in doing more things and we are revising his schedule to accommodate him.

As a general rule, I try to stay focused on topics relative to special needs children specifically. I am aware that readers with differing opinions and from many different areas of the world visit expecting posts about parenting a special needs child.

However, if I would have been able to get on Blogger to post yesterday I would have written about my stepson, "Bubba Mike" (Billy Ray's name for him). I was missing Mike so much yesterday with the news of the capture of the terrorist in Iraq.

Yesterday CNN showed more of the beheading of Nicholas Berg (believed to be done by Al-Zarqawi peronsally) than I have seen before and I wasn't prepared for the horror of it. I felt a real surge of appreciation for Michael and all the troops internationally for helping to keep our children and all of us safe from terror.
Michael is in the reserves and called to active duty for a special project. He is not in Iraq but that doesn't mean he is in no danger. He has already done one tour in Iraq. Not only is he sacrificing by being away but his wife Rebecca contributes by keeping their home together for Elora, Alena, Hans and Oren.

I wanted to say thanks to Michael and all his colleagues as well as to the families.